With regret it has been decided to cancel U18 Boys representative football until the New Year.  This includes the December Camp at St. George's Park.

Shrewsbury School was the venue as ISFA U18’s hosted the Australia Schools, for their first game on their UK tour. A game that could have been won by either side eventually ended 2-1 to the Visitors.

The early stages were a cagey affair as both sides tried to get a foot hold in the game. The first real chance of the game fell to ISFA. After along ball and flick on from Josh Lee, Rafael Pereira ran through and was unlucky after his attempt was well saved by the Australia Keeper. It wasn’t long after this that Australia took the Lead. A long range effort wrong footed the keeper to give the visitors a one goal advantage. Both sides then had chances to score but half time arrived with the score line still 1-0.

Both sides made substitutions at half time, and it was one the ISFA subs who got the home side back into the game. A terrific run from Harvey Walker was abruptly ended by the Australian centre back to give ISFA the chance to level from the penalty spot. Walker stepped up to send the Australia keeper the wrong way and get the score line back on level terms. At this stage it looked like ISFA were going to claim their second, however, slightly against the run of the play the Australians took the lead again. The ball fell kindly to the Australian centre forward following a cross from their right side and he gratefully smashed it home. This goal would eventually be the winner. Despite late pressure from the home side to get an equaliser, the Australian lads held on for a 2-1 victory.  We wish the Australians a successful tour and look forward to welcoming them again next year. 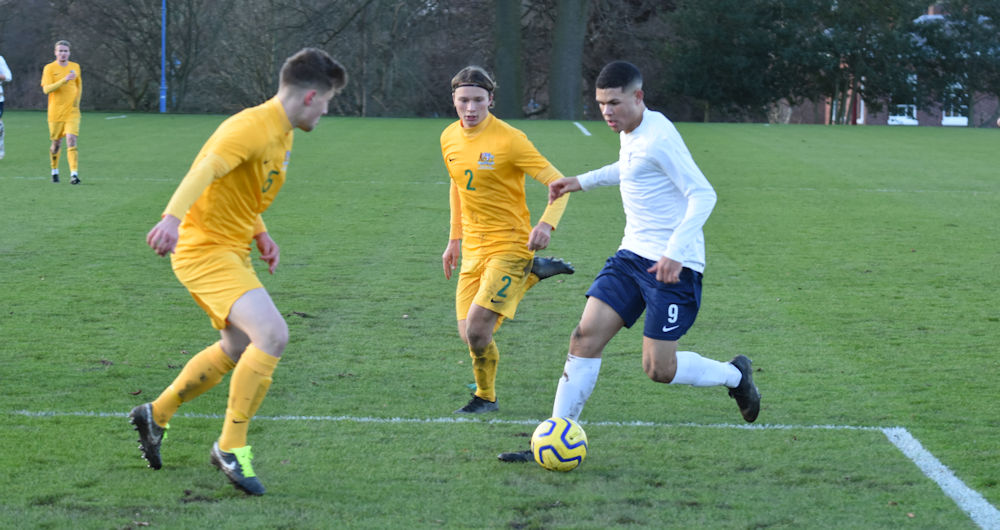 The second game at St. George Park saw an afternoon kick-off in torrential rain that stayed throughout proceedings.

Yet another bright start from ISFA who opened the scoring in the first 10 minutes. A well delivered corner by Rafael Pereira found Owen Jones climbing highest at the back post who headed in to give ISFA a 1-0 lead. As the game progressed, chances fell to both teams who failed to score, although mid-way through the first-half ECFA were awarded a penalty and levelled from the spot. A minute before the interval ISFA regained the lead, a Ben Jones cross went all the way through to find Imran Kayani at the back post who scored from close range.

Early into the second-half ECFA were awarded another penalty. The resulting spot kick was saved but fell back to the penalty taker's feet who levelled the game at 2-2. However, 5 minutes later a long pass was played forward by Joseph Chard, the ECFA defence were unable to deal with the pass that fell kindly for Harvey Walker to slot home, giving ISFA the lead once again. Unfortunately for ISFA, the game was far from over, with 10 minutes remaining a quick fire goal from ECFA pulled them back in the game, levelling the scores at 3-3. Although the scores were level, ISFA continued to work hard looking for that opening once again. 5 minutes before time they were presented with a chance, when Jack Gallagher intercepted the ball in the middle of the park to then play a pass setting Walker on his way. Harvey’s run set him through on goal beating a defender in the process, but to then see his goal bound effort superbly blocked behind for a corner. However, the day was not to be ISFA’s as the resulting corner was cleared by ECFA who countered effectively to score and win the game 4-3.

The ISFA players represented themselves extremely well over the two days at St. George’s Park with lots of positives to take into the upcoming fixture with Australia. 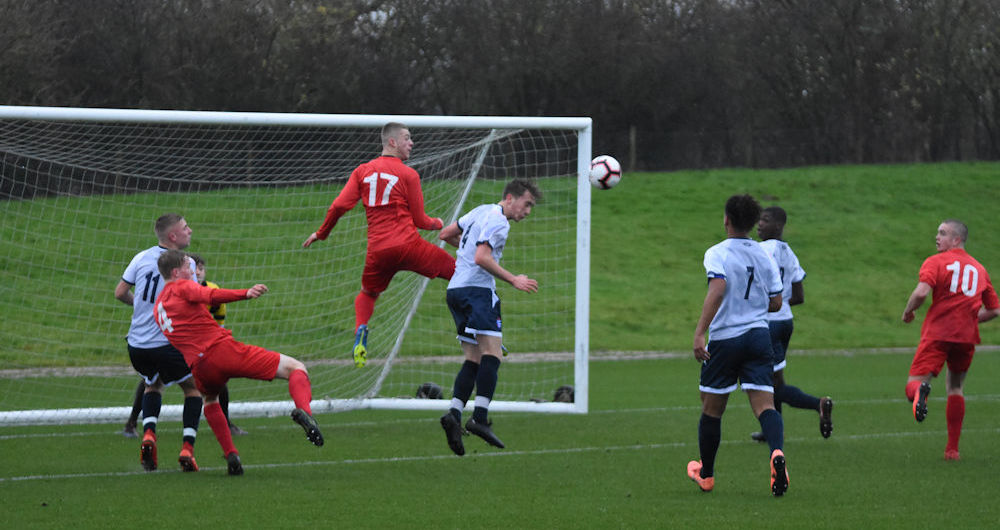 For the first game at St. George Park, ISFA played under the lights against a strong Welsh side.

ISFA started the game strongly dominating both the ball and territory in the opening 5 minutes, resulting in a goal from a well worked free-kick delivered by Rafael Pereira, then headed down by Drew Baker and tapped in by Imran Kayani from close range. As the game progressed in first-half Wales grew stronger but were unable to capitalise on their chances with fine saves by Kian Johnson to keep ISFA in the lead at the break.

After the break, ISFA came flying out of the traps. A cross from the right hand side found Josh Lee at back post who headed down for Jake Raine, only to see his effort cleared off the line and to the feet of Pereira who was clinical and gave ISFA a two goal lead. 2 minutes later, ISFA extended the lead from a free-kick by Pereira who found a leaping Jake Raine at the back post who finished exquisitely. ISFA then produced an excellent breakaway goal, with Josh Lee finding Pereira on left hand side who cut back and crossed for Jack Gallagher to bring the ball down, cut inside and finish past the keeper. 5 minutes later, ISFA extended the lead to 5-0 with another counter-attacking goal. Pereira added another assist, as he broke down the right hand side finding Lee who beat two defenders and finished past the keeper. However, unfortunately ISFA were unable to keep a clean-sheet as Wales scored two goal before the end of play.

This was an excellent first game of the international season for ISFA and a superb start from the players. 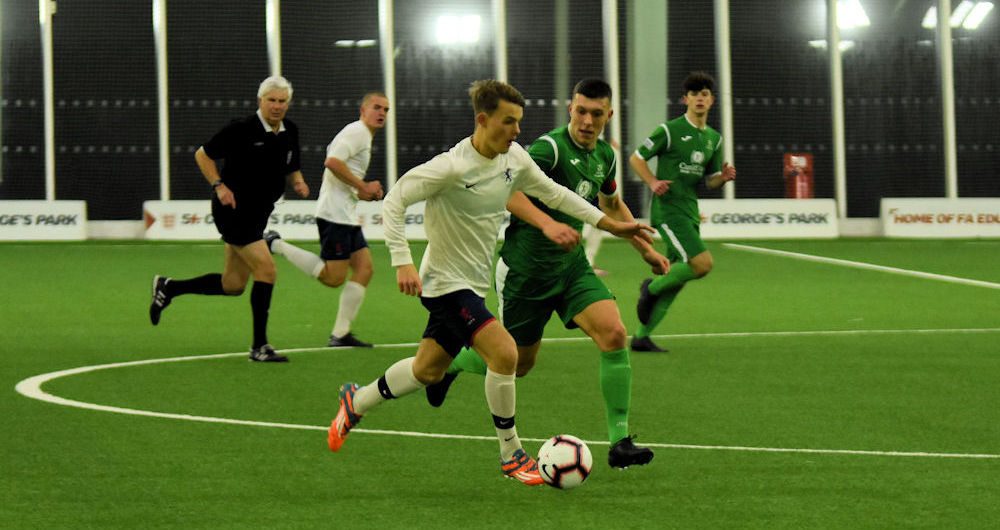 Despite the recent torrential rain, host school Shrewsbury had a perfect surface for the game to be played on.

ISFA started the better side grabbing an early goal from Imran Kayani heading home from close range following a corner. Shrewsbury Town gradually started to get a hold of the game and scored a well worked goal midway through the first half. Shrewsbury Town continued to play some good football and scored on the stroke of half time to go in 2-1 ahead.

ISFA once again got off to a fantastic start scoring within 60 seconds via a left footed strike from outside the area from Jake Raine. The game opened up and was played at a great tempo and Shrewsbury Town yet again scored from a good bit of free flowing football. ISFA started to dominate the game following a change in formation and scored a well deserved equaliser after Jack Gallagher was put through 1v1. With ISFA then pushing for a winner and playing some attractive attacking football, Shrewsbury Town showed their character and managed to score the winner against the run of play within the dying minutes.

This was an excellent first game of the season for ISFA U18s competing against a full time academy side. It bodes well for the season ahead.

ISFA came up against an extremely strong Nottingham side full of ex-ISFA superstars.  The pace of the game was intense from start to finish but the opposition were more physical and tactically astute against the ISFA group who were playing together for the first time.  Nottingham were clinical in front of goal to go 2-0 up at half time though ISFA will have rued missing some good chances at the other end.  A mature and disciplined performance frustrated the ISFA players in the second half and, whilst searching for the goal to get them back in the game, they were punished at the other end.  Despite the loss, this was an excellent challenge for the group and an enjoyable one hosted at the excellent Basford United facility by the University.

ISFA enjoyed more than their share of possession and territory throughout the game.  They thoroughly deserved their lead when Olaoluwa Folorunsho crossed for Josh Lee to finish at the back post.  This lead was soon doubled as a cut back found Joseph Shard to neatly finish in the bottom corner of the goal.  The second half appeared to see ISFA take an even bigger grip of the game carving out plenty of chances but unable to finish the game off.  A bizarre last 10 minutes saw a penalty and equaliser meaning that the score was somehow leveled.  The team will be extremely disappointed not to have come away with the win but should be please with their performance for the vast majority of the game.

ISFA came out firing on all cylinders and dominated early proceedings.  Ben Jones delivered a pin point cross that fell to Nathan Daniels to finish and a minute later Braiden Hall made it two with an outstanding strike from 20 yards. Toby McCallum then played in Imran Kayani who cooly finished to make it 3-0 within 13 minutes.  Kent then sprang into gear, had their share of the game and scored an superb free kick on the half hour mark.  Minutes later though, ISFA countered with Rafael Kaidussis Pereira playing through Olaoluwa Folorunsho to make it 4-1 at half time.Whilst the rest of the country's matches were cancelled due to the rain, Charterhouse School presented 3 excellent and clearly weatherproof pitches for this and the U17 matches.

A second half shuffle and ISFA regained supremacy in terms of possession and territory, playing some delightfully creative football.  A Kaidussis Pereira shot was well-saved and then followed in by Daniels for his second.  Move of the match though came following some good possession and a clever 'dinked' throughball from Hall for Harvey Walker to finish.  Hall was once again the provider for Kaidussis Pereira to deservedly get on the scoresheet.  A goalmouth scramble in the ISFA penalty box led to a great save by Cameron Pike only for the rebound to go in for a consolation to Kent.  With minutes left on the clock, ISFA finished with another move down the right that was turned in by Walker for his second.

A superb start to the year from this talented group of players.