In sunny and very warm conditions, for the first time, ISFA U16 took on Wales Schools' U16 on the immaculate pitch at Burnham.  A large, lively and enthusiastic crowd were treated to a crazy, open ended game with controversy, goals, commitment and some superb play.

In a hectic opening, Wales sprinted to 2-0 lead in 10 minutes through 2 well taken penalties.  However, ISFA fought back with 2 impressive goals and then nearly took a 3-2 lead on the counter.  Wales then seized on this and again went ahead, this time with a superb header.

Wales extended their lead in the 2nd half before both sides then had several chances to score.  ISFA seemed to be set to reduce the deficit but a last man foul stopped the attack but reduced Wales to 10 men.  However, the Welsh held out superbly and saw the inaugural game out in a calm and secured manner.

A huge thank you to the Welsh team, coaches and parents for making the journey up to Burnham.  Thank you also to Burnham for expertly hosting both the U14s and U16s games.

ISFA U16 vs. Millwall

In superb conditions, blue sky and an immaculate playing surface greeted both teams at the impressive City of London School playing fields.

ISFA started impressively, with a flowing move down the right which was well cut out....and Millwall then countered impressively.  The tone was set for the game as Millwall looked to press high and attack quickly and ISFA looked to play through the press and the lines.  ISFA created several chances in the first half, but Millwall were impressively clinical.

ISFA again played through the lines well in the second half narrowing the deficit either side of a Millwall goal.  The Millwall 'keeper then pulled off several impressive save before a well worked Millwall attack secured the win.

This was a hugely impressive display from the U16s in a very competitive game, played in an excellent spirit.  A huge thank you to Millwall for making the game so enjoyable for both sides and the U16s look forward to taking this impressive display into the last game of the season - their International vs. Wales after the Easter break.

Brighton started at a high tempo, looking to force the game in ISFA's half and, after a miscued clearance, took an early lead.  ISFA gradually grew into the game, initially counter attacking directly and then gradually building possession in the opposition half.

The second half saw Brighton up the tempo and force the game deep into ISFA territory.  ISFA also showed compsure at the beginning of the half to break the press and bring the ball out.  However, the constant Brighton pressure built and ineviatbly lead to a few stray passes as Brighton extended their lead, scoring three more in the second half.

A huge thank you to Brighton for hosting a very competitive and hard match and ISFA look forward to building towards matches against Millwall and Wales Schools to round off the season.

After two training sessions and a shortened training game against England Colleges U18 at St. George's Park, the ISFA U16 National Team had their first full game against a physical Lincoln City side. The first half was played at a very high tempo, with the ISFA team struggling to control the flow of the game. However, despite the basketball nature of the match, ISFA had several chances to take the lead before Lincoln took a two goal lead at the break, seizing on two ISFA errors.

The 2nd half saw a significantly more compact ISFA team reduce the amount of space and the number of chances on offer to Lincoln. Despite this, it was Lincoln that again struck to take a 3-0 lead. ISFA battled hard to get back into the game but, despite creating several half-chances, ISFA were unable to close the gap. The final score did not reflect the progress and encouraging signs on show, and it was great to see the U16s putting some of their training into practice and things look bright for the 2021-22 season.

Photographs from the St. George's Park Camp can be found at www.rwt-photography.co.uk. 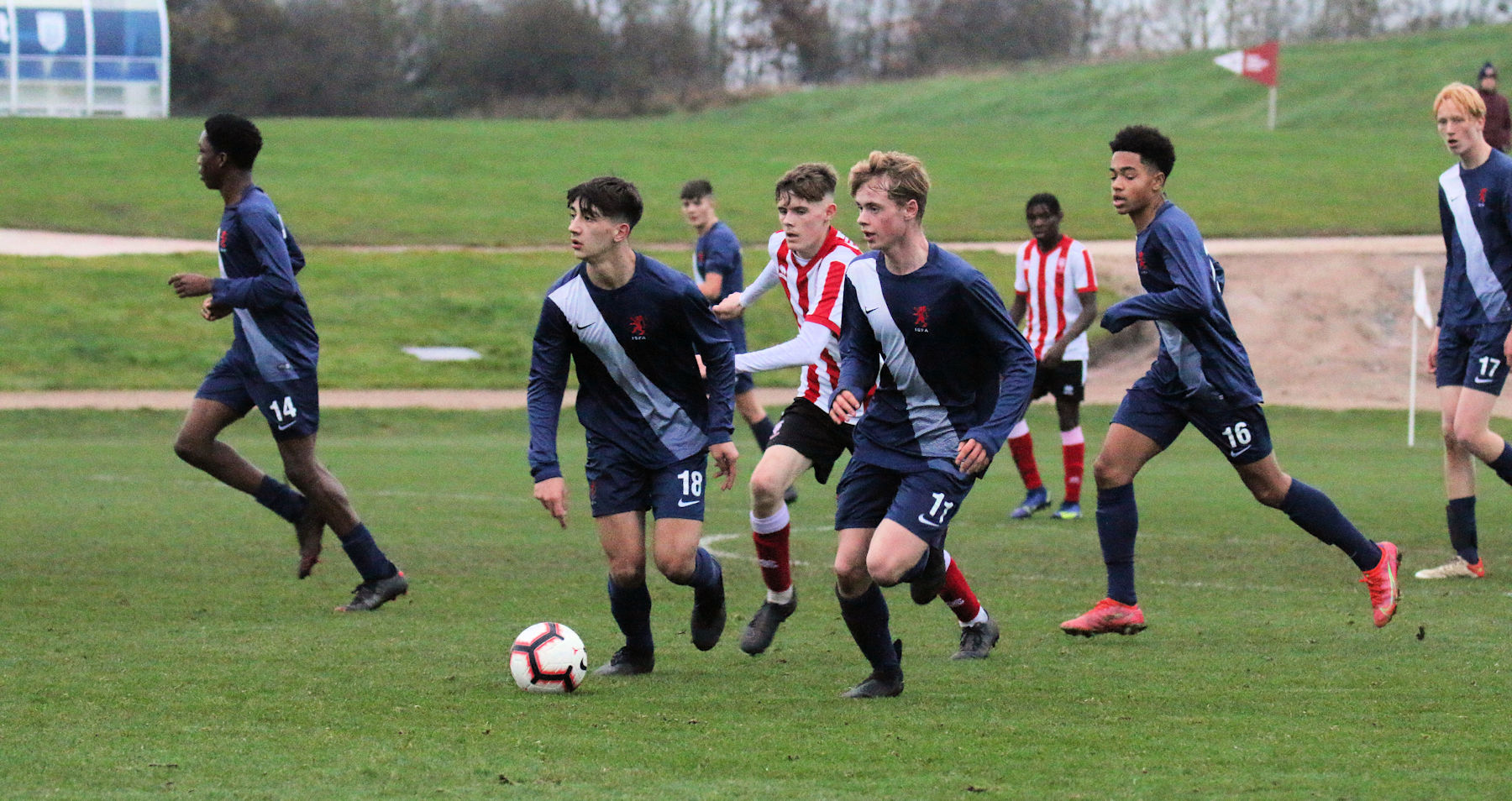 On Sunday, 30 of the best U16 Independent School footballers in the country came together for the final national trial at Shrewsbury School.  In what can only be described as "challenging" weather conditions, the standard of football on show was impressive, with high levels of technical ability and game craft in abundance.

The ISFA U16 'White' side were the quickest out of the blocks and took a 2-0 lead into half time.  However, the 'Reds' came back strongly, pulling a goal back in the 2nd period and followed up with multiple chances to draw level.  However, it was the 'Whites' that pushed ahead and scored two more goals towards the end of the 2nd half to win the trial match.

This really was a great advert for Independent School Football and huge credit goes to the players who put in such impressive performances in genuinely difficult conditions.  Thank you also to parents and guardians who made the journeys to Shrewsbury on Sunday.

An initial training squad for the National Team camp at St. George's Park will be released early next week.

ISFA U16 South Trial XI  vs. Essex
In wet conditions but on a superb surface at Brentwood School, an ISFA U16 South Trial XI took on Essex on Sunday 10th October.
Essex opened the game at a fast pace and for the first 20 minutes dominated proceedings and deservedly took the lead after a misplaced back pass. However, the ISFA XI grew into the game and sharp work down the right-hand side saw a cut back cross calmly slotted home.
In the 2nd of 3/3rds, ISFA started a lot brighter, but Essex then upped the pace and again took the lead. To the credit of the ISFA side, they then created several chances, also had a goal ruled out for offside.  A good ISFA move down the left-hand side rounded off the 2nd 1/3rd and was calmly finished inside the 6-yard box.  The final 1/3rd of the game saw the Essex team continue to press forward and to take a deserved victory with a 3rd and final goal.

The next stage of the trial process takes place on Sunday 7th November in a fixture against Kent Schools. Emails will be sent out to parents of all players to confirm selection or otherwise for this game. A final decision on players before the National Trial game (Sunday 28th November) will then be taken after the Kent match

In perfect conditions for football and on a superb playing surface at City of London School, an ISFA U16 South Trial XI took on Kent Schools.   A high tempo start saw Kent fly out of the blocks, hitting the post twice.  Kent had the upper hand in first 25 minutes and took a 1-0 lead.  However, the ISFA side grew into the game and had a strong final 15 minutes, including having a goal disallowed for offside.

The 2nd half saw a more composed ISFA side control the possession and create several half chances.  However, Kent continued to be dangerous on the break, adding a 2nd from a counterattack and a 3rd from the spot.  ISFA pulled a goal back from a superb strike from left wing and had several chances in the final 10 minutes to narrow the gap.

It was great to see another set of trialists representing the U16 South side.  A squad of between 32 and 36 North and South trialists will be announced early next week and invited to attend the National Team final trial on Sunday 28th November at Shrewsbury School.